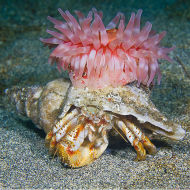 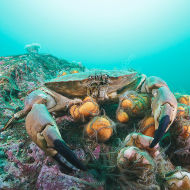 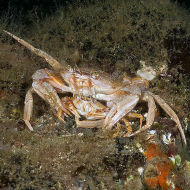 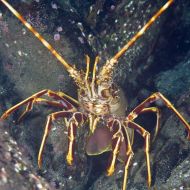 The crustaceans illustrated here are all protected by a shell which is like a suit of armour. Most use their own resources to produce the shell but once this is made, it doesn't grow any further. So as the animal develops in size it needs to cast its shell and grow another one for a better fit. The new shell forces off the old one but this new underlying shell is soft at this point which makes the animal very vulnerable to predation until it hardens.
Some crabs have only rudimentary armour and use the ploy of disguise as well – see the Scorpion Spider Crab photograph.
The hermit crab is different as it has a soft body and never grows a shell of its own. Instead, it uses an empty shell of another animal as its home. However, as it grows it has to find a larger shell, maybe eject the current "tenant" and make the switch with the attendant dangers this entails. Seeing hermit crabs fighting is a common sight whilst diving and when they actually change shells, it is done in almost the blink of an eye.