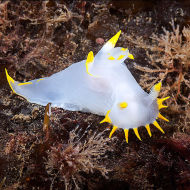 Worms and slugs found in the garden are not the sorts of creature which would attract the adjective “beautiful”.
There are many different types of worm in the sea and many of them like their terrestrial brethren, live hidden under the sea bed and a diver will never see them. There are however, types of marine worm that filter feed on organic matter or plankton suspended in the water. To do this they construct tubes of mud, sand and mucous in which they pass their lives. The head of these worms is a filtering arrangement and is often a fine, feathery set of tentacles which protrude into the water from the end of the tube. Many of them are startling beautiful. To get near them with a camera is something of a challenge because they withdraw in a snap if they detect movement or a change in the light.
Like many people, I cannot bring myself to pick up a garden slug and yet, in the sea, they really are some of the most delicate, colourful and attractive animals you are likely to find. Sea slugs, or nudibranchs as they are often called, are very common animals around inshore Britain but they need hard surfaces on which to pursue their lives. A hard surface may be anything from rock to the metal of a wreck or even a kelp frond.
They are annual animals – perhaps a rather strange concept if you are a gardener! But they don’t have just one life form. They start their lives in a larval stage, drifting in the plankton and when conditions are right, often as light levels pick up in the Spring, they are triggered to transform into their second life stage such as you see in some of these pictures. To do so they need to settle onto a hard surface. Of course, whether they manage it is a matter of luck and countless millions must fail. Sea slugs are very specialised feeders and many species will only prey on one or two types of animal so, when they do settle onto a hard surface, it is very hit and miss whether they find their prey there. If they do, they continue to develop and particularly with the smaller varieties, they reach maturity very quickly – maybe just a couple of weeks– at which point they mate, lay eggs and die. The eggs rapidly hatch and the next generation of larvae begin their long life stage in the plankton until the following year. However, some of the larger species have a longer life cycle although it still all occurs in an annual period..